7 simple ways to suppress your appetite 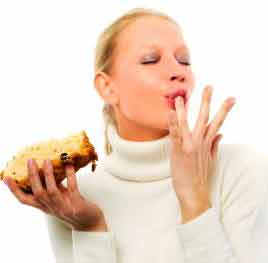 Coping with hunger pangs is one of the hardest aspects of any weight loss regimen and many dieters ultimately find their growling stomach proves to be their undoing. This is why appetite suppressants can be such an important dieting aid.

Eating a lot of fatty foods is one best ways to nourish and grow a nice blubbery set of love handles, and everyone knows it, but fat is also a necessary part of the diet. The body needs a certain amount of fat and—strange to say—adding a little fat to an overly strict diet can actually assist dieters in attaining their weight loss goals. But there’s a catch—it has to be the right kind of fat.

Researchers at the University of California, Irvine, have discovered the presence of oleic acid (a fatty acid) causes the small intestine to produce a substance, called oleoylethanolamide, that signals the brain to inform it the stomach is full. Many shop-bought appetite suppressants trick the brain in a similar way and the benefits these misleading signals can provide should not be dismissed too lightly.

Good sources of oleic acid include:

A little fat in the diet can also aid appetite suppression by delaying the stomach emptying time and this, of course, helps dieters retain their ‘full up’ feeling for a little longer.

Garlic, ginger, cinnamon, rosemary, basil, and fresh mint also appear to have the power to kick the appetite into touch and reduce the desire of in-between-meals snacking.

A study published in the 2012 edition of Flavour showed strong aromas like garlic can encourage people to take smaller bites of food.

People who eat less food consume fewer calories and when the body’s calorie intake is insufficient for its daily needs it is forced burn stored body fat to attain the extra energy it needs. Whether appetite suppression is attained by few dietary and/or lifestyle changes, or from one of the more effective appetite suppressant on the market, cutting down on calories works. Suppressing the appetite is not the only way to lose weight, but it can deliver results and, when it comes to dieting, results are the most important thing of all.

Tests show that cutting food into smaller pieces can help to cut the calorie intake. In one study, conducted at the Arizona State University, researchers carried out an interesting experiment with bagels. Some subjects were given a whole bagel; others received a similar bagel that had been quartered.  The people who received the full bagel not only ate more of it, they also consumed a greater amount of calories at their next meal than the test subjects whose bagel was cut into smaller pieces.

The high fiber content of flax seed can prevent blood sugar levels from rising too quickly and reduces the desire for further food.

5. Get with the Grapefruit

Although grapefruit is not to everyone’s taste a side order of half a grapefruit with every meal can lower insulin levels and help curb a troublesome appetite.

Rye is high in fiber, crammed full of nutrients, and tastes pretty good too. And if that isn’t already enough reasons to add a little rye to the diet, some studies show rye also triggers a lower insulin response than many other grains, creating a longer lasting feeling of fullness that can result in a dulled appetite during the next meal.

Apparently getting the heart broken isn’t the only time the emotions can overpower the appetite.  Strange as it sounds, a romantic dinner be every bit as effective. Researchers from the Cornell University carried out some tests in a restaurant environment and noted an 18% decrease in food consumption when the lights were dimmed and soft music was playing.

Click here to see the most effective appetite suppressant supplements