Fat Burn by Developt – what does it do

Fat Burn weight management capsules are produced in California, USA, by Developt and, like the company’s other products, Fat Burn has been developed with the serious or part-time athlete in mind, rather than people who only hope to lose a few pounds.

According to Developt, use of their capsules can provide the “burn, burn, burn” required to provide “the lean shredded body you want”.

How the Formulation Works

With a name like “Fat Burn” there are no prizes offered to anyone who correctly guesses the formulation is intended to work as a fat burner. Anyone seeking a fat burning supplement is spoiled for choice these days, but Fat Burn has been designed to protect against the loss of muscle tissue during the fat burning process. As most bodybuilders are aware, muscle tissue can sometimes be lost during periods of dieting or “shredding”, so if it can deliver the goods Fat Burn has a chance of becoming a popular supplement choice with gym-goers and other athletes who are keen to protect the fruits of their hard work. 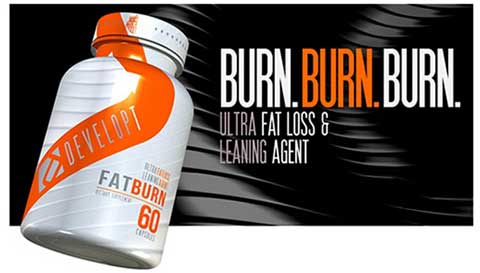 Each capsule provides 550mg of the Developt FatBurn Blend:

• Coleus Forskohlii (100mg): A plant derivative that has the ability to boost testosterone levels, aid muscle protein synthesis, and fire-up the fat burning process. It is a common inclusion in bodybuilding supplements, but some studies suggest it may offer more benefits to men than to women.
• Acetyl-L-Carnitine (100mg): Often referred to as ALCAR, Acetyl-L-Carnitine is an amino acid that has a good reputation for boosting energy levels and encouraging fat burning. It is also believed to protect against muscle loss and is a common inclusion in bodybuilding supplements.
• White Kidney Bean Extract (100mg): White kidney bean extract has an outstanding starch blocking reputation. After it enters the digestive system it disrupts the capabilities of an enzyme that is required for starch digestion. This means that a large percentage of starchy foods like bread, potatoes, and pasta that would normally provide a lot of calories cannot be digested. So the “blocked” starch passes through the body and exits with the stool, taking its calories with it.
• Capsicum (50mg): Studies show supplementation with capsicum extracts can speed up the metabolism and increase the body’s calorie burning potential by up to 12 times. Other studies suggest capsicum also acts as an appetite suppressant. Not surprisingly, it is one of the most respected weight loss-providing ingredients available today.
• Yerba Mate (50mg): An ingredient that is sourced from a shrub. In some South American countries the leaves are used to brew a popular tea called “mate”. Its main value here is as a caffeine provider, but yerba mate’s caffeine levels are extremely low when compared to coffee. The possible benefits associated with caffeine include extra energy, better concentration, appetite suppression, and boosted metabolism.
• Naringin (50mg): A flavonoid sourced from grapefruit. Research suggests naringin may be useful for enhancing the benefits provided by caffeine.

Usage Guidelines – Capsules should always be taken on an empty stomach and be washed down with 8-10oz of water. Developt recommends new users take one capsule on the morning and monitor for tolerance issues. If no problems are experience a second capsule should be taken mid-afternoon, but at least 5 hours should be left between doses. Presuming no tolerance issues arise, it is permissible to take two capsules the following morning and one capsule in the afternoon and to continue supplementation at this level, but it is important not to exceed three capsules in any 24 hour period.

At the time of this review Nutrition Warehouse was the only Australian distributor of Developt products and they were out of stock when it came to most items, including Fat Burn.

Its hard to look past PhenQ in this category. PhenQ has been the market leader in many countries including Australia.

PhenQ can burn fat and suppress appetite – it has many success stories and positives testimonials.

Read our review on PhenQ here